An Aussie family in the jungle of West Papua 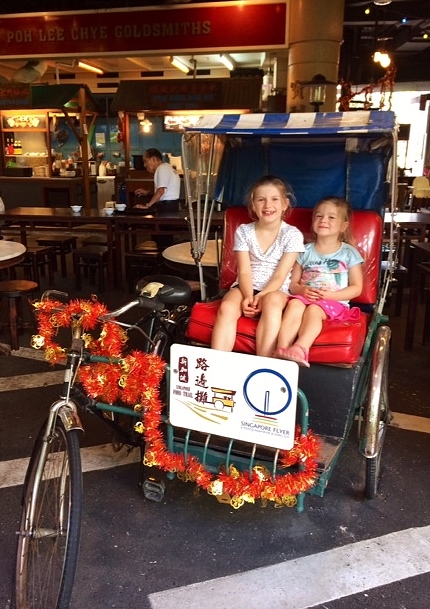 Last week we journeyed to the delightful Singapore on what’s known on the mountain as a ‘Visa Run’.  When John initially started work here, he was granted a four-month visa which expired in mid-February, requiring us to exit Indonesia in order to apply for renewal.  Most expat visas come up for renewal from January to March which sees Tembagapura experience a steady exodus of expats during this period, resulting in many challenges for the community from a staffing and schooling perspective.  However, the show must go on, and so it does.

The Indonesian Embassy in Singapore is Freeport’s preferred port of call for visa renewals, offering the quickest turnaround time and on February 8, it was our turn.  Fittingly, Ava’s ‘Unit of Inquiry’ at school at the time was ‘Transportation Systems’ and boy was she spoilt for choice or research options during our brief Singapore Fling.  Just getting from Tembagapura to Singapore involved us taking a car, town bus, chopper, hotel bus x 2, jet plane x 2, an airport train and finally a taxi which, after around 12 hours in transit, delivered us to our very pleasant hotel in the heart of the city called The Orchard. 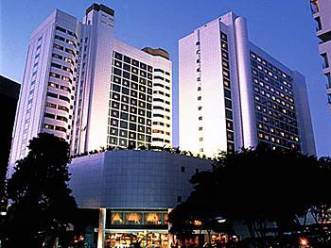 Singapore was abuzz with plans for the celebration of the Chinese New Year – The Year of the Goat – so the city was boldly decorated in all things Chinese, together with many a goat and an abundance of fruit-laden miniature orange trees in doorways and lobbies.  I was puzzled by the symbolism of the fruit trees and have since discovered that ‘tangerine’ and ‘orange’ in Chinese sound similar to the words ‘luck’ and ‘wealth’ and the bright orange colour symbolises ‘gold’ and as such, the display and gifting of these fruits is believed to bring good fortune to the occupants.  So now I get it.

We were booked for a short three-night stay in Singapore so we woke on our first morning ready to embrace the sunshine and go exploring.  After surrendering our passports (something I don’t think I’ll ever get used to!), we were off to the nearest MRT (subway) station to not only gain super-efficient city-wide transportation, but also to provide research fodder for Ava.  Our first stop was Gardens by the Bay – a beautiful parkland located near the spectacular Marina Bay Sands hotel complex.  The gardens were just perfection and a great way to spend the morning,  The Supertrees were a big hit – stunning structures that harvest solar energy to light up the gardens at night.  It seems everything in Singapore not only looks good, but serves a purpose. 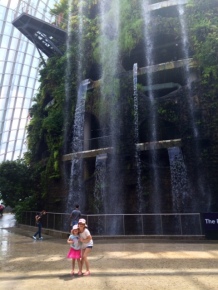 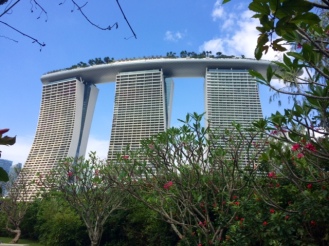 Grace could not stop talking about the ‘ferris wheel’ she had spotted on entry to the gardens so after a late lunch (such a pleasant change to have a myriad of dining options to choose from) we were off to ride the Singapore Flyer and see the sights from a bird’s eye view.  Something that fascinated me were the huge number of cargo ships gathered at it’s deep and vast harbour just beyond Gardens by the Bay, hundreds of them.  I didn’t realise it at the time but it is the worlds busiest port with around 1,000 ships in port at any given time.  No wonder it seemed busy!

Singapore is so clean and controlled, with many reminders about the place to ensure it stays that way.  Vandalism offences carry heavy fines and punishment by caning which appears to be an effective deterrent.  I commented to John that in Singapore, compliance breeds compliance such that “if everyone else is doing the right thing, then I guess I should too”.  Eating, drinking and even breastfeeding is forbidden on trains where even a sip of water can land you a $500 fine.  When chewing gum was used to block sensor doors on the Singapore MRT and bring the system to a halt over 20 years ago, they simply banned the sale of chewing gum. Effective.  Public shaming is also alive and well in Singapore and I walked past a couple of signs naming offenders under the ‘Outrage of Modesty’ laws which encompass offences related to ‘unwanted touching’.  Interesting place!

After a very full day in the Gardens and a thorough exploration of Singapore’s transportation systems, we headed off to the Hard Rock Cafe for some pub fare, something we don’t get a lot of on the mountain.

Day two in Singapore was another big day at what we think is one of the best zoos in the world.  The Singapore version uses a clever blend of ditches and moats rather than cages to house their animals in natural looking exhibits.  It was a great day and the kids had a ball.  The highlight of the day was the giraffe feeding which extracted giggles galore from the girls.  The lions, zebras, big cats and rhinos were a sight to behold although we must say that the resident white tiger seemed a little melancholy.

It’s sad to think that our girls may never get the opportunity to see these magical beasts in the wild, given the impact the rapid deterioration in their natural habitats is having.  While seeing these animals at the zoo is a great experience, it’s certainly a far cry from the real thing.

The zoo also gave Ava the opportunity to test a couple of more traditional forms of transportation.  This one’s for you Terry…

A full second day saw both kids asleep in the (cheap-as-chips) taxi on the way home so it was a quiet night of in-room dining while we put some thought into how we would spend our final day in Singapore.  Sadly the super-efficient embassy had processed our visa renewals in record time so our hopes of gaining a couple of extra days in this great city were quashed.  Nonetheless, a three-night company-funded stay in Singapore was better than none at all!

Day three saw us taking our final train ride out into the suburbs to visit the Singapore Science Centre.  Singapore is renowned for it’s science and technology exploits and the Science Centre didn’t disappoint.  Our only regret was that we only had a couple of hours here, exploring it all could easily take a whole day.  Our main point of interest was the Human Body Experience but before making our way there we spent an hour just playing with all of the optical illusions and experiments lining the post-entry foyer.  It was great fun for both the kids and the grown-ups!  Once we made it to our exhibit of choice, it didn’t disappoint.  Greeting us was a giant-sized human body that we could walk through and explore. 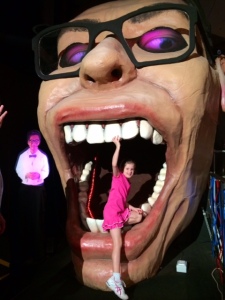 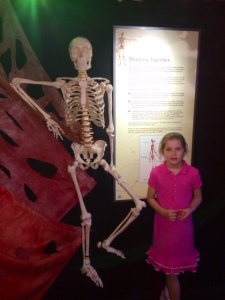 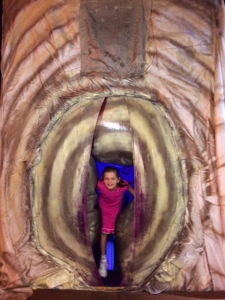 That long yellow thing is the pancreas (yep, I had no idea either), the pic of the kidneys is for you Caitlin, and yes, that is Ava exiting out the rear end…how cool is this exhibit?  Needless to say, lots of fun was had by all and while we wished we could stay longer – to learn more about volcanos, tsunamis and to simulate some earthquakes – alas it was not to be as our first flight of the day was calling.

Even our exit from Singapore was a pleasure – spending time in Changi Airport is no hardship with good food, decent shopping, beautiful floral displays and plenty of fun things like to koi pond and butterfly garden to entertain the kids. 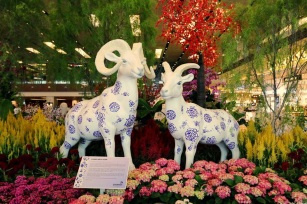 Boarding our flight meant the start of a long and tiring journey home – two overnight flights, a one-night stay at the Rimba Papua Hotel in Timika, Biometrics (again – just to be sure our fingerprints haven’t changed…) and then the chopper back up to Tembagapura.  I had stocked up on a suitcase full of food supplies in Singapore before coming home but it was still a shock to the system to find the local grocery store here very light-on in the veggie department and stocking zero in the way of salad ingredients.  Over a week later and we have only just got milk and mouldy carrots back in store.  I will never again complain about the quality of fresh produce at our Aussie grocery stores!

It’s just over five weeks before we head back to Australia on our Easter break – something we’re all looking forward to very much.  It’ll be here before we know it!

← The First Three Weeks – Done and Dusted!
Grasberg Mine →

3 Comments on “Our Singapore Fling”

Our Life in Pictures

snapfitnessnq
Life and Stuff and Things
Our Indo Adventure

An Aussie family in the jungle of West Papua

Our Family's Adventures in Indonesia